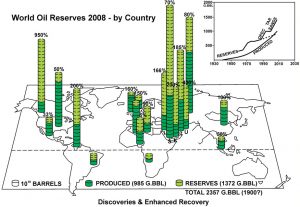 Although comprising approximately 7.5% of the world’s land and continental shelf area, the sedimentary basins of Australia have contained only 8 billion barrels of black oil of which half was contained in the tiny, rich, shelfal area of Gippsland Basin in the Southeast. This compares with 2008 estimates in excess of 2.4 trillion barrels of Produced and Reserves of oil for the world. Australia has 1.3% of World oil reserves – that is, less than one-fifth of the prospectivity on a per square kilometre basis. Estimates of Australia’s gas reserves are even less as a percentage of World reserves, with most of these reserves on the West coast. This further emphasises the conundrum that the population concentration is on the opposite side of the country with little gas in between.

After 50 years of exploration in the major conventional gas bearing Eastern basins it is unrealistic to expect a concerted exploration drilling campaign would produce appreciable volumes of Eastern Australia gas reserves, ever, let alone within a few years in order to reduce the current gas crisis.

Unconventional coal seam gas (CSG) exploration has been successful but the shortfall against contracted reserves is seeing a northerly gas flow exodus from the traditional producing basins to the Gladstone LNG plants. For example, major Tasmanian Industrials told they face 95 per cent price hike for gas delivered to Bell Bay. This situation was predicted some years ago. It is now clear that only one East Coast LNG plant was viable, not three, because of the low CSG gas deliverability per well. Currently, arable land on the fringes of the Bowen Basin is being turned into gopher country.

Unlike the low Earth stress environment in the Northeast USA Marcellus shales which have produced large quantities of unconventional gas by fraccing, similar attempts at fraccing unconventional gas bearing shales have been disastrous in the highly stressed Nappamerri Trough of the Cooper Basin, East-central Australia. Given low to modest success reported elsewhere with shale gas exploration south of Darwin, such gas cannot be depended upon to fill the undiscovered conventional CSG supply void. A fraccing ban in the Northern Territory and the land use problems in the Bowen will still arise with unconventional shale gas unless man-made fracced reservoirs attain Marcellus production rates which is highly unlikely. A pipeline from Darwin to the extensive eastern pipeline network may, however, be a better longer term alternative solution now rather than when first mooted in 1975! But this is not an immediate solution.

The need to recognise the importance played by Earth stresses in converting huge unconventional gas Resources to realistic economic Reserves is crucial. USA oil production from low stress oil bearing shales in the Baaken and from low porosity carbonates and silts in Permian and Eagleford have been so successful that producers are currently keeping world oil prices suppressed below US$50 per barrel. The high Earth stress regimes in Australia prevent an unconventional gas bonanza from rescuing Eastern Australia from its current crisis. In the short term, we need to look elsewhere either through importing gas via pipeline or by LNG imports.

John Davidson has 45+ years’ experience in the petroleum industry—starting with Esso Australia in 1970. He has been active in petroleum exploration in Europe, Australia, Africa, North America and SE Asia for over 40 years.