Oil and gas experts Mr John Davidson and Dr Andrew Wadsley who, between them have more than 90 years’ experience in the oil and gas industry, have carried out an independent analysis of the gas supply shortfall to Eastern Australia. Their analysis is based on the actual production performance of each field and a reserves analysis derived from a detailed understanding of the geology and reservoir characteristics of the main petroleum basins.

“The AMEO estimate of a 54 PJ gas shortfall in 2018 and 48 PJ shortfall in 2019 is confirmed by our analysis. However, the shortfall is not caused by the development of coal-seam gas (CSG) for export from the Gladstone LNG plants.” said Dr Wadsley. “In the short term, CSG can provide sufficient additional gas to supply the domestic gas market over the period 2018 to 2019 and should be seen as a solution to the problem, rather than the cause.”

The independent analysis provides a month by month detailed picture of the production shortfall, shown in the Figure. From 2018 onwards there is increasing shortfall in gas supply until, in 2028, Gippsland Basin reserves are depleted at which time there is no proven, non-CSG, gas resource in Eastern Australia available to supply the domestic market. 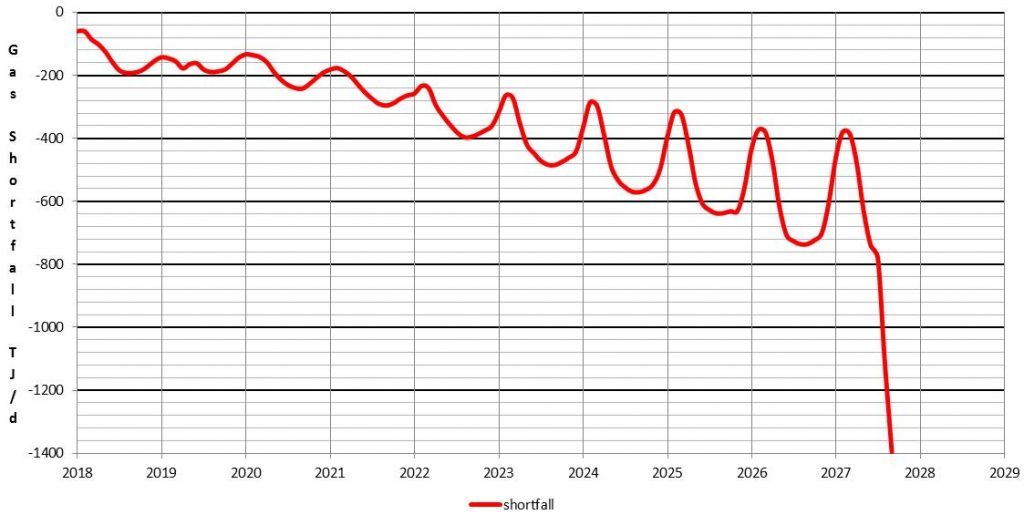 Mr Davidson pointed out that the cause of the shortfall is principally due to the failure to find commercial unconventional (tight+shale) gas in the Cooper Basin. “As late as 2016 the US Geological Survey (USGS) was predicting proven+probable (2P) gas resources of 27.9 Tcf in the Cooper Basin, of which 14.5 Tcf was in the Nappamerri Trough. This estimate completely ignored the significant difference in rock stress regimes between the Cooper Basin and low-stress, highly productive areas in the United States, and the failure of the recent $180m drilling programme by Beach and Chevron to produce commercial gas from the Nappamerri tight gas plays.” Mr Davidson went on to say: “Our analysis of the prospectivity of Gippsland, Bass, Otway and Cooper basins shows there is little likelihood of finding substantial gas reserves to supply the production shortfall to end-2028. Beyond 2028, just 10 years from now, the domestic, Eastern Australia gas supply falls off a cliff.”

The in-depth analysis concluded that removing the ban on onshore gas exploration in Victoria and fraccing bans in all states will do little to solve the supply problem. All solutions to the supply shortfall involve importing gas from outside the traditional gas basins. The analysis looks at short-term (2018-2019), medium term (2020-2027) and long-term (beyond 2028) gas supply options:

In the short to medium term, there is no viable alternative to importing LNG into SE Australia. From 2020, the supply shortfall exceeds 200 TJ/d, which is significantly greater than the capacity of any potential new field developments or expansions. Existing Gippsland wells can supply the gas, but this could lead to curtailment of already-contracted gas in the mid 2020’s. Failure to meet the shortfall will inevitably lead to very chilly winters in Victoria and South Australia, and possible brownouts in all states including Tasmania as GPG (gas-powered generation) is progressively shut in.

The analysis by Mr Davidson and Dr Wadsley is based on proven production engineering principles and understanding the geology of each producing basin in Eastern Australia. A course explaining these issues is currently being run regularly – visit the website epguru.com for more details.

Not a word about Domestic Gas Reservation ??? Weird

Gas reservation will ultimately be too little. It helps the immediate 2018-2019 supply problem, as confirmed by the agreement between the LNG producers and the Prime Minister, and can supply base load gas thereafter. But the whole SE Australian gas supply is cratering and will be substantially gone by 2028. A key feature of the SE Australian market is the large winter-summer swing of about 400 TJ/d. Historically, this was met by the major high permeability fields in Gippsland, namely Barracouta, Marlin and Snapper. But these have been in production for almost 50 years and are almost depleted, and there is no swing capacity remaining in the Cooper Basin. Storage such as Iona can supply peak gas demand, but does not have the capacity to meet the winter-summer swing.

The SE market requires base load gas, swing gas and peaking gas. The simplest solution is a West-East pipeline to supply base load plus some swing and LNG regasification to supply the remainder of the swing demand.

CSG from Queensland could provide all of the base load but this would be at levels significantly higher than the 15% gas reservation mandated by Western Australia. Going this route would expose the Australian gas industry and government to serious issues of sovereign risk which could ultimately cost Australia more than investing in an East-West pipeline.

To my understanding, Australian gas consumption is a fraction of Australian gas production and a reserve of only 4% export would solve the isssue.Concerning the increase in production for domestic purpose, Gas producers have undeveloped fields, the gov could implement a use or lose it regulation on these exploitation rights.

Unfortunately, most of the Australian gas reserves as on the West Coast, hence the value of a West-East pipeline. While there are undeveloped fields in the basins which supply the Eastern Australia domestic market, most of these are small. The Cooper/Eromanga and Gippsland basins have been in production for 50 years – it is very unlikely that substantial gas accumulations (say, >500 PJ reserves) have been overlooked by the gas companies during this time. But even 500 PJ would supply the SE gas market for less than one year. The latest sanctioned development is the Cooper Energy, Sole field in the Gippsland Basin with reserves of about 240 PJ due to come on production in 2019 – it will supply 25 PJ/yr for about 10 years. Useful but we are looking at a shortfall of over 300 PJ/yr by 2028. There are discoveries such as Dory, but even if this field proved to be commercial, it won’t be on production before 2028.

Obviously there is not enough gas, and yet Australian governments have tied our short to medium term energy supplies to rely on gas fired electricity generation.
Some like the National (Coal& Gas )Party and Tony Abbott have nailed not only their colours to the Gas mast, but done everything in their power to destroy the Renewable Energy sector.
It is renewable Energy that could supply our electricity into the future, and going by the above report, it will have to.

To blame the shortfall on the failure of one play fails the historical test. The gas price cycles and when the price increased investment flows. The reason is the bans and moratoriums killed nearly all onshore and some offshore plays. When the NT opposition announced if they got into power they would ban fracing – many hundreds of millions of dollars withdrawn overnight. $3B invested in NSW all lost. $2 billion withdrawn from SA – Offshore play. NSW Gloucester, Camden projects all cancelled – AGL withdrawing all together. I worked on 3 other small projects in NSW all gone. Not to mention Victoria.
In the USA gas price reached $18/GJ [13.42 USD/MMBtu] in 2005 whereas the price today is $4.11/GJ [3.06 USD/MMBtu, NGV17].
No one predicted this – I mean no-one. Investment flowed from everywhere, most plays failed, but some spectacularly succeed.
That is how our industry works. If all the proposed investment proceeded somewhere someone would have succeeded. Success usually occurs in the least expected area.