In a previous post (East Coast Gas Shortage not caused by LNG Exports) it was stated that “the cause of the [Australian East Coast] shortfall is principally due to the failure to find commercial unconventional (tight+shale) gas in the Cooper Basin”. In the press, other explanations, ranging from LNG exports, onshore exploration and fracture-stimulation bans, and gas price manipulation, have been blamed for the crisis. All of these contribute, but none explain the underlying supply shortfall which is due to rapid decline in gas supply from the conventional Eastern gas supply sources – principally the Cooper basin – and the non-commerciality of tight gas or shale gas prospects.

Gippsland basin gas reserves are effectively exhausted by 2028 – Figure 2 of the 2015 Gas Statement of Opportunities (GSOO) published by AEMO from shows this (reproduced below) and our own analysis of BHP Billiton reserves reported to the ASX (read in conjunction with ASX reserves reports by Woodside) confirms this. 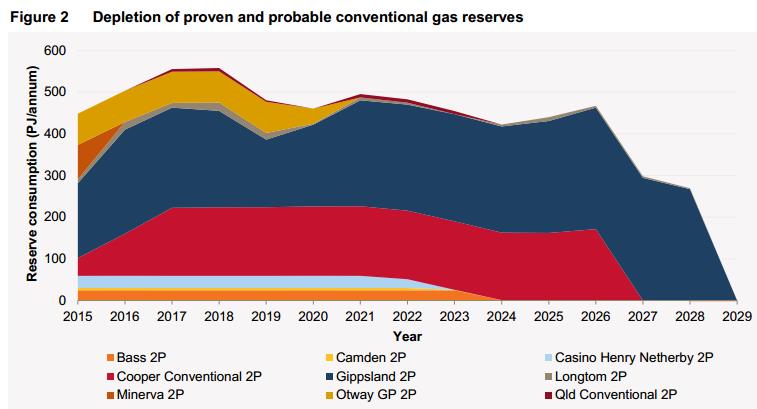 This plot also shows Cooper basin conventional reserves depleted by 2027 with a production rate of about 150 PJ/yr – equivalently, 400 TJ/day. This rate is consistent with the Moomba rate of 400 TJ/d shown in Figure 18 of the AEMO 2013 GSOO below. This Figure shows Cooper conventional gas production continuing past 2027 to 2033 and beyond, with an additional 200 TJ/day of shale gas coming on production from 2019. 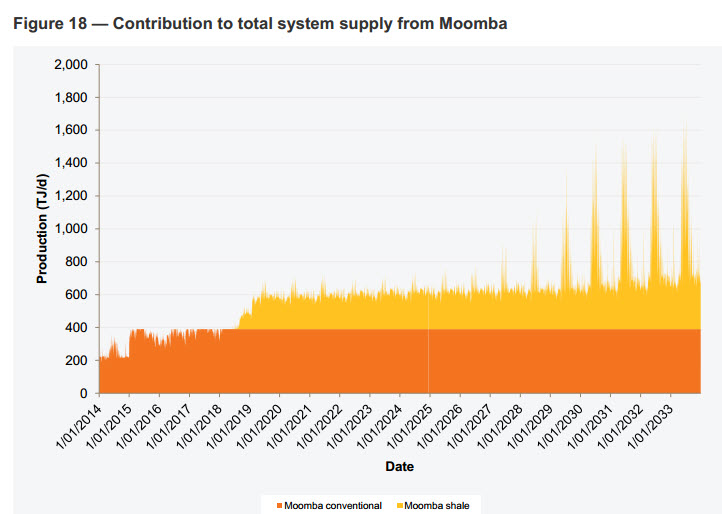 However, post-2012, the Moomba gas plant (which I am using as a proxy for Cooper basin production) hits 400 TJ/d for only a few days in June/July 2016, as shown in the Figure below. From 2008 onwards both peak and average capacities were in continuous exponential decline. This decline is due to pressure depletion of existing fields, and failure to replace well capacity by drilling new fields. Total basin capacity has been in continuous decline as newer fields coming on stream have been of poorer quality and lower individual well capacity.

Santos spent $800m on upgrading the Moomba gas plant and drilling new wells prior to the GLNG plant coming online in September 2015. Over the period June-2015 to June-2016 Moomba reached 400 TJ/d capacity, but total deliverability declined very rapidly thereafter. A harmonic-exponential decline was fitted to the post-June 2016 data, as shown in the following Figure. The area between the red curve (which is the post-2016 trend) and the purple curve (which is the pre-2016 trend) equals the reserves addition due to upgrading the Moomba plant and aggressive drilling of new wells. However, the decline is so rapid that most of this reserves addition is accelerated production: that is, the gas would have been produced anyway under the previous drilling programme, so the upgrade did not result in substantially increased new reserves. This is why the trend line drops below the previous pre-2016 trend. That is, gas production has been moved from post-2023 to pre-2023 when the decline curves cross, with possibly only a little increase in true reserve, probably due to extra compression capacity.

What does this mean? The reservoirs of the Cooper basin are under depletion drive, so they continuously decline in pressure which leads to continuously lower well deliverability over time. Most of the Gippsland basin fields, on the other hand, have strong aquifer support, which means they can continue to flow at high production rates until gas reserves run out when water hits the production zones in the well-bores. The only way the Cooper Basin fields could meet a constant 400 TJ/d capacity is if there is sufficient new drilling to make up for lost capacity due to pressure decline in the existing reservoirs. Without discovering a new large field of good permeability (which is extremely unlikely since the basin has been in production for over 50 years and most large stones have already been turned over) there are insufficient contingent and prospective resources remaining in the basin to maintain a high production capacity. In fact, Cooper basin deliverability is likely to fall below 200 TJ/d by mid-2018 and below 100 TJ/d from 2022 onwards

The constant 400 TJ/d assumed by AEMO in its GSOO was always fictional – as an understanding of reservoir geology and flow dynamics straightforwardly demonstrates. In fact, following the substantial upgrade of the Moomba facilities in 2015, the gas plant only just managed to hit 400 TJ/d before the rapid decline in production has rendered most of the increased plant capacity redundant.

Of course, it was not supposed to be like this. AEMO’s Figure 18 of their 2013 GSOO shows a rapid increase in shale and tight gas production from 2019 onwards. In 2011 the US EIA reported recoverable shale gas reserves of 85 Tcf in the Cooper/Eromanga basins and Santos, in a presentation of 2013, quoted this figure as technically recoverable resources. However, the disappointing drilling program of Chevron/Beach in the Nappamerri Trough and the lack of commercial follow up by Santos of its Moomba 191 and 194 shale gas wells seems to have dampened the idea of a shale/tight gas bonanza for the Cooper.

It‘s obvious that Santos were expecting both an increase in conventional gas reserves and significant unconventional (tight+shale) reserves when they approved two trains for the GLNG plant and upgraded the Moomba gas plant. These reserves did not materialise and should have been classified as prospective – at best contingent – and not included in any AEMO GSOO, until commercial and technical development of this prospective resource had been demonstrated. Flowing one or two wells in a new play type in the high rock-stress Australian basins did not prove commerciality for the multiple-Tcf volume of resource assumed, as amply demonstrated by the lack of commercial unconventional gas production today. Inclusion of these prospective resources, and assuming the Cooper basin could sustain a constant production rate of 400 TJ/d, has been highly misleading, if not negligent.

The resulting gas supply fiasco, which began with the USGS over-estimating unconventional gas resources in Australia – an estimate which completely ignored the different high rock-stress regime in Australia to that of the US productive basins – and subsequent industry and government bodies jumping on the band-wagon, has led directly to the energy shortfall in Eastern Australia. Santos has contracted 750 PJ of gas from the Cooper basin for the GLNG plant. Extrapolating the rapid decline seen for Moomba gas production, there is less than 600 PJ of economic gas reserve remaining. Not enough to supply the GLNG contract, let alone supply gas into the Eastern Australian domestic market.

The dramatic impact on Eastern Australia gas supply is shown in the Figure below where I compare the current production shortfall (red) with the surplus supply if the AEMO Cooper basin forecast had eventuated (purple). This negative impact (about 180 PJ/yr) should have been foreseen if a proper technical understanding of the petroleum engineering and geological issues impacting gas well deliverability had been applied to production from each of Eastern Australia’s main gas supply sources: Gippsland, Cooper, Otway and Surat-Bowen. This did not occur, and Australian gas consumers, both industrial and retail, have been left stranded by the very advisory agencies set up by government to ensure such a fiasco could not occur.

This analysis is based on proven production engineering principles and understanding the geology of each producing basin in Eastern Australia. A course explaining these issues is currently being run regularly – visit the website epguru.com for more details.